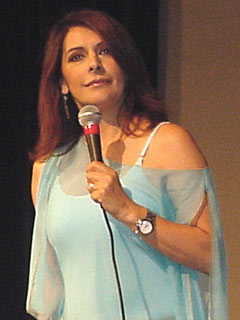 In a live chat with fans on her official site, Marina Sirtis (TNG: Troi) didnt seem too happy with the direction Paramount is taking for Star Trek XI. "I agree with you all about the prequel, Gene Roddenberry always said that Star trek should go forward" she replied to the sentiments that the next Trek film should be set after Star Trek Nemesis, despite its disappointing box office. Her fans seem to want the new Trek film to focus on the Rikers abourd the Starship Titan. Star Trek Nemesis established that Sirtis’ Troi and Jonathan Frakes’ Riker were married and went off to have their own adventures. The Titan has become the basis for a series of popular Star Trek books.

More letter writing campaigns?
Many of her fans discussed sending protests to Paramount executives regarding the new film (seemingly a perennial Trekkie tradition). Sirtis let them know her view of the executives: "I just don’t think anyone at Paramount gets Star Trek anymore", going on to say "they are killing Trek. They’re trying to reach a new ‘Lost‘ audience….dont just dont get it". She went on to suggest that after the executives ‘killed’ Star Trek, Euegene ‘Rod’ Roddenberry (who recently told a panel at Comic Con that he knows almost nothing about scifi or Hollywood) should buy the franchise. Siritis didn’t stop with the new Trek film, she also took the time out to take a swipe at the last Trek TV show "Enterprise was NOT Trek. Just had Vulcans thrown in for seasoning to call it Trek". One has to wonder if she let the executives at Paramount know her views of their show when she agreed to appear in the series finale of Enterprise last year. Well work is work, she had this to say about reprising a role in another sci-fi franchise : "I would reprise my role in Stargate in a nano second, but they’ve not asked me…maybe you could all write them angry letters demanding I should be back on the show". Perhaps her most telling statement was "if I’d have invented Star Trek, I’d still be on it"

I am sensing that Sirtis is nuts.

Nuts, egotistical, and no talent! ;)

So if Enterprise is NOT Trek, why appear on it, wearing your Star Trek uniform?

Coz she can’t get any other work!

Guess who’s not getting invited to the premiere!

What I find very amusing about this is that ever since TNG premiered, Sirtis has come across as a snob, but what’s worse, she thinks she is a beautiful goddess and wants us Trek fans to believe it. She has even stated in an old interview that when she was a child, she was called “The Ugly Duckling” and even showed photos of herself to her much surprised husband. But my question is, what’s there to be surprised about? She’s still “The Ugly Duckling” anyway. Have you ever seen her nose? My god, its absolutely horrid! It is so long that it will attract every bird to perch and shit on it. I’m glad Paramount is done with TNG crew, especially that terrible actress Sirtis. Good riddens bitch!

I don’t think we need to diagnose her mental status or perceived physical shortcomings in order to parse her comments.

I’ve been critical of Paramount and Bad Robot and don’t totally disagree with her that some of the powers that be don’t “get” Trek or know what to do with it. We all know they’ve thrown their hands in the air and given Trek to JJ. Either it works or they wash their hands of it. Not exactly a long term plan.

Putting Rod in charge, however… Not cool.

Enterprise is canon and she should get over it. So are Voyager and DS9.

I can look at any of the Trek series or films and see things that don’t live up to expectations. But regardless of the kitsch and cheese factor present in all, Roddenberry’s original underlying concept of hope, unity and a better future are still there. Just because the execution fails short doesn’t diminish this message.

I pray the message isn’t lost in the new film in favor of mindless vacant action to hit short term 2009 Q3 business goals.