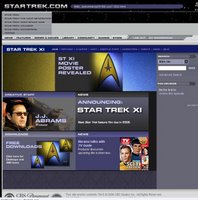 [Trek XI Report Exclusive]
Since their first announcement over 3 months ago, StarTrek.com hasnt had much content for Trek XI. Well that is all starting to change according to CBS Digital’s Sandy Stone (Content Producer for Star Trek.com), telling the Trek XI Report that StarTrek.com has been deemed the official site for Star Trek XI. The first evidence of this was last week when the first Star Trek XI teaser poster was announced on the site, as well as being made available for download. ‘StarTrek.com’ features prominently on the poster and will also adorn all future promotional materials, trailers, etc. This is all part of a new coordinated effort between CBS and Paramount Pictures (now separate companies after the split up of Viacom) . In addition the Trek XI section on ST.com has already been expanded to include some news and interview reprints, bios & photos of the creative team as well as some downloads. .. “and this is only the beginning” says Stone promising much more in terms of exclusive content.

New creative regime bringing new ideas
According to Stone, JJ Abrams and the new creative team behind Star Trek XI are very web savvy. It was this team, along with Paramount Marketing, that decided that ST.com should be the hub for Trek XI. StarTrek.com is seen as a great tool for building interest and excitement (or ‘buzz’ as they say in H’wood) during production for the upcoming Trek film. All types of behind-the-scenes content, such as production diaries, blogs, interviews, photos and videos are being discussed as possibilities for the site. Although new for a Trek film, these are the types of things being done by some of the more innovative official film sites, such as bluetights.net and kongisking.net. “We are really excited about working with JJ Abrams and the new team”, says Stone “they really see the potential of the internet, and we all want startrek.com to be the hub for Trek XI content”

Getting Lost with Star Trek XI
A clue to what may lie in the future may be how Star Trek XI producers JJ Abrams and Damon Lindelof have handled that other little project of theirs…Lost (you may have heard of it). On the official Lost Website you get the usual things (pictures, vids desktops, webgames, etc), but it is all very topnotch…this week they are featuring a video of ‘fan theories’ shot at ComicCon. In addition there are a series of podcasts with interviews and insights from the cast and crew of Lost (including Mr Lindelof himself). StarTrek.com has dabbled a bit with podcasts during the last year of production for Enterprise so it seems like a natural fit. There is also the very innovative ‘Lost Experience‘, which is a web based game for the hardcore Lost fans to find clues to their favorite show around the web and by phone, part of which includes a blog on the official site as well as a number of official tie-in sites like HansoExposed.com (will we learn that the Hanso Foundation were responsible for the genetic experiments leading to the creation of Khan?). Lost also has an innovative mobile strategy that will include a series of ‘mobisodes’ broadcast during the show’s hiatus this winter. These things show that the new creative team are indeed quite up to speed on the web…lets hope that we can see this kind of creativity show up with Trek XI. 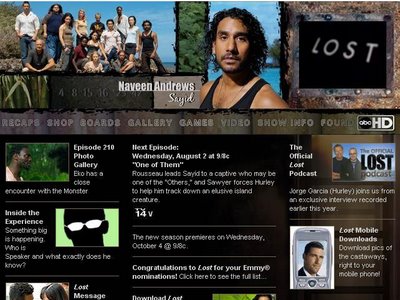 is ‘the Trek XI Experience’ in our future?

More integration at ST.com is a welcome sign
Not only is it good news to hear that there will be new kinds of content for Star Trek XI on the web, it is good to hear that it will be centralized on ST.com (although there are bound to be some subsites and possibly a site put up by Paramount Marketing…all content will be available at ST.com). To the outside world StarTrek is a single brand and franchise (very much like that other franchise ‘Star Wars’, whose starwars.com is an excellent central resource for everything associated with that brand). However, unlike StarWars, Star Trek is spread around quite a few companies and subsidiaries of Viacom, CBS and their licensees, as evidenced by the many ‘official’ Star Trek related sites. For example, besides StarTrek.com there is Simon and Schuster’s Star Trek Books site , plus Bethesda Software’s Star Trek gaming hub (which itself has no mention of a key game: Perpetual’s Star Trek Online with its own site). The Trek XI Report is glad to see the coordination with Trek XI and looks forward to more of this kind of coordination on ST.com. 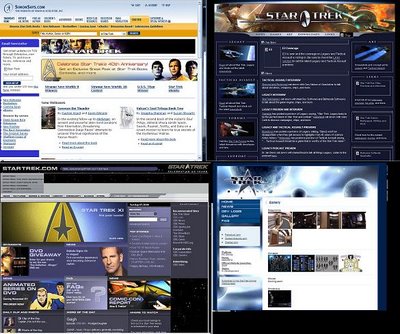