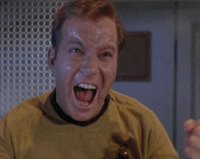 The new Star Trek movie is still two years away but it has already has it’s very own ‘dancing baby’; in the form of a very angry Captain Kirk. Wherever people are talking about the new movie, invariably you will find a link to the ‘Shatner Is Kirk’ page at ytmnd.com (a community-based site where users upload various humorous animations and videos). Since its creation 3 weeks ago, the vid has been viewed over 65,000 times. You will often see links to the ‘Shatner Is Kirk’ page posted by those arguing against any actor (including Matt Damon) filling William Shatner’s space boots. Clearly it’s maker was sending a message that he joins in their ‘anti-recasting’ cause…or does he? The Trek XI Report talked to the man behind this internet hit, and he wants to “set the record straight”.

The fan behind the phenomenon
The ‘Shatner is Kirk’ video was made by Jonathan Riggs, a lifelong (2nd generation) Star Trek fan from Knoxville, TN. This is not Riggs’ first ‘film’, in fact he has an extensive portfolio of humorous videos including dozens of Trek themed ones. Although some of his work has got a lot of traffic before (such as ‘Burger King Owns Mc Donalds‘), Riggs’ is a bit surprised at all the attention his latest vid has garnered from around the world, including the Washington Post and the Wall Street Journal. It turns out that the inspiration for his new ‘Shatner Is Kirk’ wasn’t the Damon as Kirk rumor, but the backlash that surrounded it. When Jonathan saw how some fans were freaking out and screaming “Only Shatner can be Kirk!!” he thought the angry reactions were quite funny. The phrase itself put an image of an angry Kirk into his head so he fired up his video software and a legend was born. Riggs believed that people would “get the joke, think it was funny and then forget about it”. He finds it quite ironic that the very people he was parodying have adopted his video as a siren call to their cause.

So how does he really feel?
News of JJ Abrams taking over the franchise has made Riggs quite hopeful. As a big fan of the Original Series, he welcomes a return to that era saying “there hasn’t been any good Trek made in a long time”. Although he would be wary of a movie set as far back as Kirk’s academy days, he is on board for Kirk being recast with a new actor. Jonathan would prefer an unkown actor, but is open to Damon playing Kirk as long as the filmmakers and Damon capture that “Kirk Charisma” that made the character great. He thinks fans will accept a new Kirk, pointing out that many have embraced a new Kirk in the popular fan film Star Trek New Voyages (who claim to have over 30 million downloads). “Times have changed” says Riggs, “10 years ago a prequel would have been a bad idea, but now it makes sense”.

I agree, and whatever you think of Matt Damon, Kirk or JJ Abrams, one thing is for sure…Riggs’ vid is hilarious

Check out Riggs’ full body of work at ytmd.com

or if you ever have some time to kill just go to ytmnd.com and type ‘Khan’, ‘Kirk’, ‘Picard’ or other Trek luminaries into the search…you will have hours of fun