IDW Publishing just released their latest solicits. May will be a quiet month for Star Trek comics. TrekMovie has the covers, the details, and a blast from the past for you, after the break.

When I reviewed Star Trek #17 last week, I mistakenly reported that the ongoing series would end with issue #21, but I’m happy to say I was wrong. The series continues in May with a story that follows on the heels of Star Trek: Countdown to Darkness.

The hit ongoing STAR TREK series picks up right where this year’s blockbuster sequel STAR TREK INTO DARKNESS leaves off! Don’t miss the all-new adventures of the crew as they go boldly into the unknown, in a story overseen by STAR TREK writer/producer Roberto Orci! Set during the earliest voyages of The Next Generation series, join Picard, Riker, Data, Worf, Troi, Yar, and Laforge as they learn about each other and encounter: A de-powered Q who seeks refuge aboard the Enterprise as he attempts to learn what it means to be mortal; A world where warriors see battle as a child’s game; A world with dark secrets that threaten both the ship and crew, and more.

Reprints the DC Comics series The Next Generation #1-6. In case you didn’t see them when they were first published 25 years ago, here are the covers for the first Next Generation comics and a page of original art from issue #1. No Star Trek crew has ever had such well-defined musculature nor such flexible bodies, as those drawn by Pablo Marcos and friends. 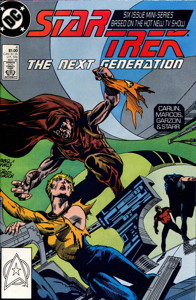 With the thin amount of STID news lately, I feel like we’re in the eye of the hurricane, the calm before the storm.

@Mark, when is the second issue of “Star Trek: Countdown to Darkness” coming out ?

@Mark, Thanks for the info.

I stopped buying IDW’s Trek comics about 2 years ago, when they hit rock bottom & started retelling TOS stories in the JJ-verse.

I hope they get back to work on original material based on the various series some day. Until the stop regurgitating old stuff, they won’t be getting my money.

I guess the cover for #21 is a bit of a spoiler because it would seem to indicate that none of the main characters die in STID.

I remember those early TNG comics, with everyone’s arms waving about in every other frame. Wesley looked like he was having a spazz attack whenever he appeared. When the book went to “regular” status, I felt Michael Jan Friedman didn’t have a very good grasp of the characters and I remember wishing they’d switch him with Peter David who was writing for the “classic” ST comics at the same time.

@5. Rock bottom? What did you expect them to do? Ignore the alternate universe?

7 could quite well be the enterprise A in that cover. guess we wil find out in less than 90 days now

I quite like the tos-retelling of the comics and I hope they continue with that.

So they’ve reached the post-movie period without doing Space Seed.

Why is the Green – er, the Caucasian-Skinned Goblin tearing Tasha’s uniform?? And that guy who zaps Picard on the other cover also looks a bit too superhero/villain-like for Trek…

Bird of Prey, the guy zapping Picard is Q. I bought those NG comics from a 7-Eleven when they first came out. They are really strange. Set during the first season.

I’m sure I still have those 1988 issues of the TNG stuff somewhere in my comics bin. I’m guessing the artist thought “Spandex costumes? Those actors must have superhero physiques then!”
I absolutely loved the Sienkiewicz cover with the LCARS graphics.

Man, I remember getting all of those DC comics back in 87 and still have those first 6 TNG issues in great condition. I have two copies of TNG#1 and LCARS background was sweet. It’s SO HARD TO BELIEVE that TNG is 25 years old.

I don’t know. Scotty looks kind of ghostly. Or is that just Simon Pegg that looks ghostly …

“TrekInk” sounds like it would be dedicated to awesome star trek-inspired tattoos.

What the heck are are “solicits”?

(I tried looking it up, but none of the definitions seem to work with the usage of the word in this post.)

“Solicits” refers to solicitations made to retailers to get them to order the product being solicited. In this case, IDW’s Trek comics. This is why you’re seeing things like “Order 20 copies, get a variant cover” in the listings.

I tried a few IDW Trek comics several years back, when they first got the rights. I was unimpressed. The stories had little depth, and weren’t worth the outrageous price (sadly, that’s true of comics in general now). If IDW were to publish more DS9 comics, I would support that title though.

Although I have some old TNG comics from DC, I don’t have those really early ones (with the overly muscled characters).

Interesting that they did an issue where Q loses his powers, seeks refuge on the Enterprise, and learns what it means to be mortal… Did the TV writers adapt (or steal?) that story a couple of years later for “Deja Q”?