The trouble with time travel stories is that it seems all the good gags have already been taken. The brand-new ebook novella from Christopher L. Bennett, Star Trek: Department of Temporal Investigations: Shield of the Gods, recycles gags and questions from influential time travel stories from the past, and puts them in service of a fairly straightforward plot, driven by lightly-sketched characters. The result is a pleasant stew that may not take you where no man has gone before, but will at least warm you up and taste fine on the way down.

Most Star Trek fans will remember the Department of Temporal Investigations from perhaps my favorite hour of Star Trek, ever – Deep Space Nine’s “Trials and Tribble-ations.” There we met Dulmur and Lucsly, two DTI agents tasked with determining if Benjamin Sisko and his crew violated any temporal laws. Other than having names that are anagrams of the protagonists in The X-Files, Dulmur and Lucsly were depicted as humorless drones, bureaucrats who had papers to file, boxes to check, and not much imagination. Dulmur and Lucsly from the Department of Temporal Investigations in Star Trek: Deep Space Nine

I have to admit that I’ve never read any of Bennett’s previous Department of Temporal Investigations stories, but Dulmer and Lucsly have apparently been fleshed out through the series of two novels and two ebook novellas. However, they only play supporting roles in this novella. In order to help out new readers there is a Historian’s Note at the beginning of the novella, orienting the reader to its place in the recent canon of Star Trek novels. And there is a page of Acknowledgements at the end that informs the reader of where they may have seen these characters and organizations before.

Even without being familiar with the series the novella is well-written enough to keep me up to speed on events and the three main characters, DTI Agents Teresa Garcia and Meyo Ranjea, and the temporal criminal they are pursuing, former Aegis Agent, Daiyar. Daiyar wants to steal a Constructive Path Integrator and use it to construct a Time Drive, an add-on that can convert any warp-capable vessel into a time machine. Fed up with the Aegis policy of limited, careful interference in the timelines of species on the brink of radical change, Daiyar aims to make a huge change in the history of an entire sector, and perhaps the entire galaxy, in order to stop a genocidal alien race from coming to power, and in the process to get revenge for the death of someone she loved. Garcia and Ranjea are out to stop her, but personal entanglements between the three that they are not aware of will complicate matters in profound ways.

The novella contains some very frank discussions of the sexual lives of the three main characters, and in large part the plot moves along on the sexual complexity of Deltan relationships. This will be to the taste of some readers, and not to the taste of other readers. Reader, know thyself.

What did I like about Shield of the Gods? Bennett borrows elements from great time travel stories of the past, but he does so with clever nods to his donors. References to “a Varley extraction” (a tip of the hat to three-time Hugo Award winner John Varley’s short story Air Raid, which was the basis for the novel and movie Millennium) and “a Matheson-Solomon retroanticipation loop” (a clever nod to the best scene in Bill and Ted’s Excellent Adventure) were especially delightful. I also deeply appreciated where the novella landed in the end. After all the hand-wringing about trying to serve the Greater Good, the characters wind up trying to just do good. And that’s a fantastic and mature place to wind up. Bill and Ted’s Excellent Adventure gets a nod in Christopher L. Bennett’s Shield of the Gods

With moderately interesting characters and plot elements that will seem very familiar to long-time science fiction readers, Shield of the Gods is not a must-read story. If you’ve followed the adventures of the Department of Temporal Investigations, you probably have an affection for these characters that I lack, and the novella will rank higher on your list than mine. If this is your first dive into this world, you may not be drawn in. The story does have its charms, however, and it has a satisfying ending. And it’s short! At less than 100 pages, it’s a quick read. I give it a slight recommendation.

Star Trek: Department of Temporal Investigations: Shield of the Gods by Chirstopher L Bennett is available now in e-book at Amazon for $3.54. 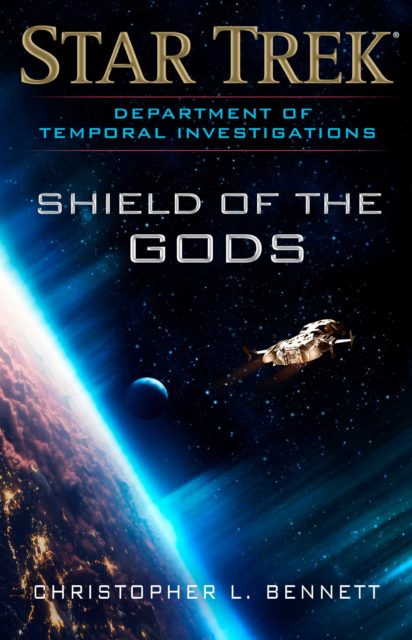 And there is more Star Trek reading to keep you company by the pool this summer. On Tuesday Pocket released Star Trek: Deep Space Nine: Enigma Tales by Una McCormack in Paperback. And coming on August 29th is Christopher L. Bennett’s fifth novel in the ‘Rise of the Federation’ series: Star Trek: Enterprise: Patterns of Interference.

And Dayton Ward has another one of this Star Trek travel books coming out on July 11th, with the Hidden Universe Travel Guide to the Klingon Empire. Waiting for more reader reviews on this.

Me, too! I’d love to read what people thought of this novella. One thing I forgot to include in my review: the name of the outpost where the DTI agents encounter their quarry is an awesome name. And the discussion between the agents about that name is a hoot.

The continued abuse of time travel stories is a close second? What’s the point of a DTI anyway, when just about everyone can time travel?

According to the events depicted in First Contact, any warp capable ship is already a time travel ship, it just needs to emit/simulate chronometric particles. It’s not even a secret, when Enterprise’s sensors picked up the Borg Sphere’s emissions of the CP’s, everyone on the bridge knew immediately what they were doing. Kinda begs the question, why didn’t the Borg just go back in time from the safe confines of Borg space, instead of slugging it out through Federation space?

Phil, my understanding was that the Borg’s time travel plot in Star Trek: First Contact was their “Plan B” – that the fight to assimilate Earth in the 24th Century was the main objective, but Picard’s intervention scuttled it. The sphere traveled back in time in a riskier venture as a backup plan.

Plan B should have been Plan A. Assimilate them in the past. It would be nice to see the time travel paradox addressed simply, or just ignore it…

I see some closed minds in the above comments . DTI was introduced into ‘Trials and Tribble-ations’ for some humor on Starfleet bureaucracy (and eventually Section 31) and to add another dimension to the Star Trek Universe . I have the novel series and it is very good . I could see George Clooney and Brad Pitt in the roles of Lucsly & Dulmur in the movie series !

That’s a pretty open mind to see a movie franchise built around the DTI. Seems like something better suited to fan films.

Phil , the novels lift the role of DTI making them more important as a liason between Starfleet and the Federation . DTI , in their investigatory role , become more like US NSA Agents . The Nu-Movies expect Fans to accept the Alternate Timeline Theorem , but I found the DTI novels to be more involved , real and exciting ! Star Trek Fan Films are finished , because of the draconian guidelines !

We’ll probably have to agree to disagree at some point, and I’m happy you enjoy them. Since the Guardian was discovered, we’ve learned in the Trek universe you can time travel by slingshoting around a star, building time portals, tweaking power signatures through transporter enhancers, the previously mentioned chronometric particles, and by flying through an apparently badly guarded natural portal, the Nexus. Seems to me there aren’t nearly enough DTI agents to investigate temporal travel, when it seems just about everyone has access to it.

It seems to me , that in a few hundred years , there would be a Department of Temporal Investigation , Phil . In the novels , they are mainly an understaffed investigative department , but with extensive covert abilities and executive powers !

As I said in my review, it’s likely that if you’ve read and enjoyed the other DTI novels, these characters will be meaningful to you, and this small addition to their stories will make you happy. I’ve not read the other novels featuring the DTI, and so I found them pretty boring and difficult to connect to. I’m glad you have enjoyed the novel series – this novella is probably then right up your alley. Enjoy!

Where was the DTI when Nero attacked the Kelvin?