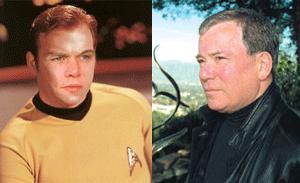 Much has been made about the recent rumor reported by the Insider that JJ Abrams wants Matt Damon to be the next Captain Kirk. The original report specifically said that JJ Abrams sought and recieved Shatner’s blessing. Since then USA Today reported Shatner as OKing Damon as young Kirk, quoting him “”I think it’s great. The tragedy is that when somebody else is playing you younger, you’re really old.” Now StarTrek.com is getting into the mix saying sources ‘close to Shatner’ claim Abrams seeking his advice is ‘news to him’ going on to say he hasn’t heard anything from Abrams or the producers of Star Trek XI. So there you have it…clear as mud.

BTW: Damon friend Kevin Smith has his doubts as well, but suggests that if True Ben Affleck should play Spock!!! (My vote: Damon Yes…Affleck No)

One creative Shatner fan has come up with his own version of how he thinks Shatner might react to Damon as Kirk.

Although funny, Shatner fans should remember that Shatner was on board for(Star Trek II-V producer) Harve Bennet’s Academy idea with recast young Kirk and Spock over a decade ago (that idea was shelved in favor of Nick Meyer’s cold-war themed Star Trek VI)

My view is that, if true, it is a good sign that Abrams and Paramount are looking for brand-named starts to help relaunch the Trek Franchise. Plus looking at older stars and not kids indicates the film would focus on Kirk as a junior officer and not as a much younger cadet (something that would please critics who don’t want to see an ‘Academy Film’)

Second! Shoot why not? I still have never seen Chis Pine in anything. Matt Damon would have been perfect. I only hope I don’t feel the same way next year.