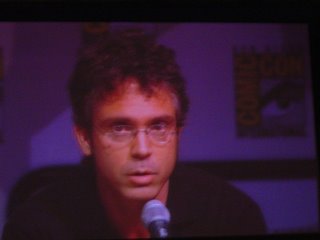 I had a chance to ask Brannon Braga (C0-Creator: Star Trek Enterprise, EP: Star Trek Voyager, Producer/Writer Star Trek: The Next Generation, etc) if CBS Paramount was considering bringing Trek back to TV now that Paramount Pictures has greenlit another Trek film. He quickly responded “There are no plans for Trek on TV”. In a follow-up I asked him and the panel why (even after the success of Lost and a bit of a resurgence of ‘genre’ TV) there are no shows set in the future. The panel included fellow Trek Alum Rene Echevarria (Medium), David Goyer (Blade), Jeph Loeb (co-executive producer, Heroes), Bryan Fuller (consulting producer, Heroes), and Frank Spotnitz (Night Stalker, Star Chamber) who all agreed that TV executives are still afraid of scifi, “especially when you start talking about ships, aliens, robots and all that stuff” said Fuller.

Scifi on TV vs Film
Braga noted that although half the top grossing films are scifi/genre films, there is a limit to how scifi you can get on TV, as an example he said that he co-creator (David Goyer) were told to not mention the word ‘alien’ when promoting their now cancelled Threshold. Braga said that scifi is all about ‘experimenting’, then explaining the demise of his latest show he said “Threshold was an experiment that failed”. Brian Fuller noted that many people who enjoy Comic Book films don’t realize they are watching scifi. Braga joked that a network can have a dozen procedural crime shows on but gets nervous when they have more than one scifi show (which seems a dig CBS…home of Threshold and rights holder to Star Trek on TV). Star Trek XI’s JJ Abrams himself recently discussed this issue of the ‘scifi taboo’ on network TV by finally coming out of the closet and admitting that his mega-hit Lost is scifi to TV Guide but saying that he kept that a secret from the executives at ABC.