Over the past couple of weeks the original Sulu, George Takei, has been all over UK TV and tabloids as he participated in the reality game show I’m A Celebrity…Get Me Out Of Here!. Takei proved popular and made to the finale which aired last night. Details and video below, plus news on a new Trek celebrity, Winona Ryder, who has also been making news in the Brit tabloids.

Takei a hit on UK Reality Show
The show I’m A Celebrity…Get Me Out Of Here! is a reality show on ITV in the UK in which celebrities live in the jungle for three weeks and compete in each episode to earn creature comforts. This show is filmed live in the Australian jungle. Takei competed against eleven other celebrities. At the end of each episode one celebrity is ‘evicted’ and this season Takei made all the way to the finale, which aired last night.

The final three celebrities in the finale were Takei along with tennis star Martina Navratilova and UK soap star Joe Swash. George ended up in third place and Swash was the overall winner. Here is video of George’s ‘exit interview’ including highlights of his time on the show.

Being full of celebs, the show is big fodder for the UK tabloids, and during his time George has sparked a few headlines. Here are just a few:

For more on the show, visit the official site celebrity.itv.com. Ryder hits the tabloids again…and again
Winona Ryder, the new Amanda Grayson in next years Star Trek movie, made big news a couple of weeks ago when she collapsed on a flight from LA to London and was taken to the hospital (where she was soon released). Of course the tabloids had a field day, some even accusing her of overdosing on tranquilizers. A spokesperson for Ryder said she was fine and it was just a precaution.  And by the next day the same tabloid that accused her of overdosing, said was saying she "looked the picture of health" as she accepted Marie Claire fashion award in Madrid on Nov 21st. 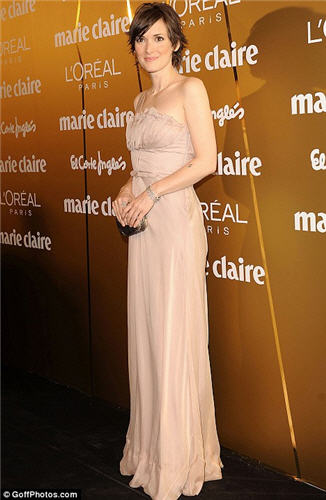 But the honeymoon with the tabloids didn’t last long as Ryder was thrown in to a controversy over some missing jewelry. Ryder was lent Bulgari diamond jewelry worth over $125,000 and then reported the jewelry missing. This of course made big news in the UK tabloids, especially due to Ryder’s 2001 conviction for shoplifting. The Daily Mail (the same tabloid that accused her of overdosing) even reported she was under police investigation. However, Access Hollywood reports that Ryder is not a suspect and the jewels went missing from her hotel room.

Winona, Winona! Sigh! I had such a crush on her in the 90s after seeing Heathers!

Cool clip; Takei rocks the house down, as ever.

Winona Ryder, will you marry me?

George is such a rascal………..My earliest memories of TV are his swashbuckling scene in STOS, I was about 6……….

Love to you, George and God Bless……….

What the world needs is more celebrity news and gossip.

Wow, George is pretty fit for a man his age.

George was fantastic on the show – he was the voice of calm and reason. His friendship with Joe was wonderful and to see him do those pushups and put men half his age to shame was so impressive

Good on ya George!!

Looks like George would be fun to party with! Watching that clip makes me seriously consider that the feud with Shatner is an ongoing tongue-in-cheek publicity stunt. I wonder if they both have a good laugh over it in private….

* 8
you post that shite on a TREK FORUM?
don’t be a hypocrite this is not the BBC news forums
take a hike

George was a gentleman during his entire time in the jungle and he should have won.

AS for Winona, shes nice to look at, but a bit damaged in the head

# 11 Of course he can do those push ins and ups as
I’m sure he tops his partner all of the time. Easy for him.

Man this just shows George will do anything to get on tv. No talent.

hmm…. is it me or does george look just like yoda in the empire strikes back in that picture with the pointy ears!

The highlight of my TV viewing last night was watching George Takei, one of my childhood heroes, eating a kangaroo’s penis.

Now that she’s going to be in Star Trek

The Daily Mail is well known for being full of absolute tosh (For our American friends tosh means rubbish). And they pick the responses they want on their E Pages. But then the papers are like that all over the world. Filth for simple minds.

21. Yeah, but it’s a heck of a more respectable than most British papers and a much better read than The Guardian!

“Yeah, but it’s a heck of a more respectable than most British papers and a much better read than The Guardian!”

You must prefer fiction to a good text book then? ;)

George was fantastic all the way through and I’m so glad he enjoyed something which could have been quite a horrendous experience for some. :)

George was a joy to watch and the British public loved him. He was outstanding and at the age of 71, to go through all that was quite remarkable. He came accross as a lovely warm hearted fellow who thoroughly enjoyed himself despite all the gruelling trials and tests. He has a great sense of humour too.

He made some great friends in the camp (or camp, camp as they called it!) especially Joe swash who kept calling him ‘gorgeous george’.

well done george – may you live long and prosper

Tabloids aside, Ryder is a brilliant actress and as a long fan of hers, her presence in the Trek movie is especially thrilling.

#16
I think George has lots of talent- not only on TOS but on Heroes as well.

to the George HATEers
if you didnt see celebrity don’t comment on it
he did the USA proud on it so don’t go and write an ignorant post
just a friendly tip :-)

Ryder may be cute, and good in ST-XI, but she ain’t coming in my house, i don’t like thieves! i feel sorry for whoever she rooms with, having to watch their stuff constantly.

Winona can steal my stuff any time. As long as she’ll date me, too.

The things people will do for money…I don’t watch these shows, but he looks like an ass.

Winona looks super-fine (but she’d look better with long hair, though). She will always be My Veronica…

For a number of reasons, I detest The Guardian and not just because of its sick, reprehensible politics!

The Daily Mail is a rag.