On June 4th, 1982, Star Trek II: The Wrath of Khan premiered to critical and fan praise along with box office success. 35 years later it is still considered one of the best – if not the best – entry in the franchise. We already spoke to writer-director Nick Meyer about the movie’s legacy, but one of the best ways to measure the impact of film is through pop culture references over the decades, especially when it pops up in other TV shows. So today we present eleven of our favorite Wrath of Khan homages to celebrate its anniversary.

11. In Living Color “The Wrath of Farrakhan”

Jim Carrey does his best Shatner in this Star Trek parody about the Nation of Islam’s Louis Farrakhan taking over the Enterprise, naturally prompting a “Farrakhaaaan!” scream.

In the episode “Ke Koho Mamao Aku,” Max and Sanjit  feud over “Janice Rand” (really a 1996 Star Trek 30th anniversary Barbie doll) but eventually make up and vow they “have been and always shall be” friends.

9. Spock in the Bible on South Park

In “Spontaneous Combustion,” Stan gives his dad a pep talk with a Bible quote, which Kyle points out is actually a Spock quote from The Wrath of Khan.

In the episode “The Road Not Taken,” Olivia and Peter meet a concerned citizen (played by Clint Howard, who was in three different Star Trek series across three different decades) who thinks his name is “Spock” and who worries about a government cover-up to make a genetically engineered superman named “Khan.”

7. ‘Caaaaaan’ on the The Critic

In “From Chunk to Hunk,” there was a quick bit when Jay references the works of William Shatner, and we get a twofer with both a Rescue 911 nod and a Khan scream parody, in honor of James “Caaaaaaaaaaaaaaaaaaaaan.”

6. Khan tries to shut down the Enterprise on SNL

Everyone remembers William Shatner’s classic “Get a Life!” moment when he hosted Saturday Night Live in 1986, but there was another Trek sketch set on board the “Restaurant Enterprise” that envisioned Khan (played by Dana Carvey) as a health inspector.

5. Montalban parodies himself on Freakazoid

Casting Ricardo Montalban as a villain in this cult classic cousin to Animaniacs was just begging for a Khan parody, which he delivered often.

4. ‘Wheatonnn!’ on The Big Bang Theory

Star Trek: The Next Generation’s Wil Wheaton is sort of Sheldon’s Khan as a recurring character on The Big Bang Theory and in “The Creepy Candy Coating Corollary” this was made very clear with yet another Khan yell variant.

One of the most overt Wrath of Khan homages was is in “Road to Rupert,” which features Stewie’s teddy bear getting a very Spock-like funeral. (Apologies for the less than ideal video below.)

In the episode “The Foundation,” Jerry quotes Kirk’s words about the loss of Spock ,which gets George (played by big Trekkie and future Voyager guest star Jason Alexander) sucked into a foundation set up to honor his dead fiancé, prompting him to deliver his version of Shatner’s famous Wrath of Khan scream.

There is something so perfect about turning The Wrath of Khan into an opera – with action figures – in “Le Wrath Di Khan.”

What are your favorites?

Do you agree with our ranking? Did we miss any? What are some of your favorite Wrath of Khan references? Sound off in the comments below.

EDITOR’S NOTE: Original article upped from 10 to 11 things because we can’t help ourselves and thanks for reader suggestion.

William Shatner Back On Tour With 11 Upcoming ‘Star Trek II: The Wrath Of Khan’ Screenings

I love how it’s just a long setup for that one joke.

No mention of the first Wil Wheaton episode from Big Bang with multiple Khan references, namely “Wheeeaton!” from Sheldon.

You are welcome Trekmovie! :-)

Well, there’s Free Enterprise too, where they do the Khan yell as they are walking to go see a showing of Khan. Not so much a pop culture parody, I guess.

Here’s my reference to KHAAANN!!!!! 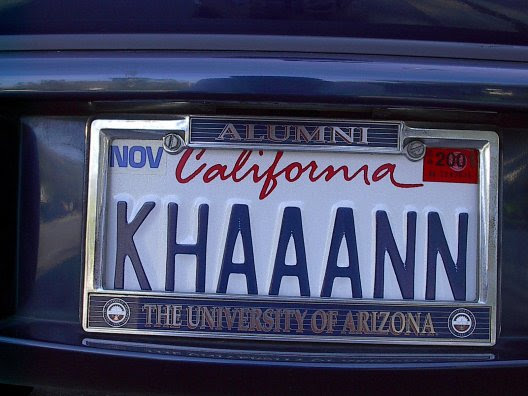 That is awesome!!! Bear Down!

Plus that episode of Family Guy where Montalban plays a cow.

That was absolutely hysterical.

Speaking of ANIMANIACS, it’s tenuous but a reboot is being pursued thanks to its Netflix numbers.

Yeah I saw that. Not sure how I feel about that…

I perhaps would have included Jon Stewart’s take on the KHAAN!! yell on The Daily Show, which he did several times, complete with overhead camera angle. I remember one occasion was a scientist named Khan was caught selling nuclear secrets.

I never understood why they do the overhead angle in parodies of it; wasn’t the original scene a simple, slow zoom, on Kirk’s face, at a flat angle?

Perhaps an eliding of that and the pov of where the camera pulls back for the echo?

The Star Truck segment of Animaniacs starts at 6:51: https://www.youtube.com/watch?v=w3bE_a7IoRM

I loved the opera. I would actually pay to see that!

In an episode of Disney’s Talespin which features characters from the Jungle Book including Shere Khan, one character says “No one is dumb enough to risk the wrath of Khan.”

“No one’s foolish enough to risk the wrath of Khan.” — Chuck Tately, scriptwriter

I’m pretty sure DISNEY AFTERNOON’s standards and practices did their best to eliminate the use of “dumb” as an appellation referencing people including anthropomorphs.

A homage to the “Khaaan” scream was featured more than once in Seinfeld. In the episode “The Susie” (also 8th season) Elaine screams out “Suuuuuuz” with the same camera effect.

Can’t find a suitable link at the moment, but as for family guy… the brief but hilarious cut of them watching “Star Trek II TWK, edited for goats” is way better than the Spock/Bufford burial scene – that was “cute” but the goat thing… lets just say I’m glad I wasn’t taking a drink at the time.