The biggest bit of news for the panel was the announcement of Star Trek: The Next Generation: Terra Incognita. The new 6-part mini-series is set in the Prime Universe, but there is a link to both last year’s Broken Mirror series and the upcoming Through the Mirror series. Like those other two recent TNG comics, this new series is being written by Scott and David Tipton. Art is being done by Tony Shasteen with J.K. Woodward and Elizabeth Beals providing variant covers.

David Tipton explained the title and concept of the series:

The idea for this series is “terra incognita,” meaning “uncertain ground.” So, we want to treat this like classic episodes and have each issue be an episode and a one-and-done story. But, there is also going to be a through-line in that during their last encounter with the Mirror Universe crew [in Star Trek: The Next Generation: Through the Mirror], someone might have stayed behind. So, in the background of this series you will see some stuff that is not for the best…So, there will be this Mirror spy in the background.

According to Sarah Gaydos, each issue of the series will focus on a different character including “some you may not expect.” Gaydos also talked about how they are approaching this series like the TV show, by having each issue stand on its own like episodes of TNG. And in a statement sent out by IDW immediately after the panel, the Terra Incognita series is described as the “beginning a brand-new wave of episodic miniseries.”

Covers for the first issue were shown at WonderCon, and released by IDW after the panel. 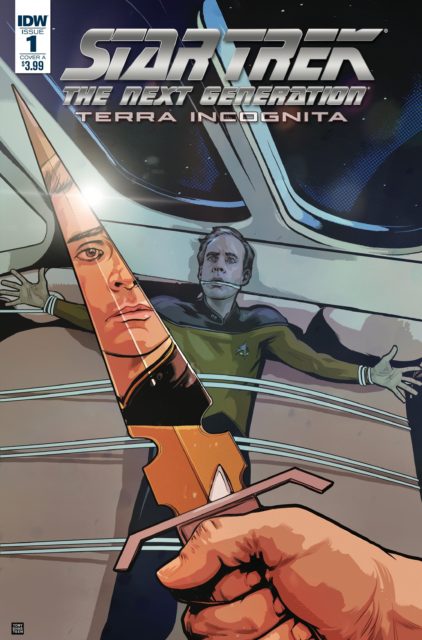 TNG: Through the Mirror series kicks off with Worf

Before Terra Incognita arrives, IDW launches Star Trek: The Next Generation: Through the Mirror in May, with one issue coming out each week. This series is a follow-up to last year’s popular Star Trek: The Next Generation: Mirror Broken and focuses on an incursion of the Mirror Enterprise D crew into the Prime Universe. Scott Tipton teased the first issue of the new Through The Mirror series as “Worf-centric,” saying they wanted to start with Worf in this new series because they couldn’t use him for the previous series set in the Mirror Universe. David Tipton revealed that the series starts on a planet that has been building up its defenses after the Borg attack at the Battle of Wolf 359. Cover for Through the Mirror #1

In addition to the connecting covers by J.K. Woodward, there will also be variant covers for all five issues by concept artist Peter McKinstry, which were previewed at the panel. Peter McKinstry variant covers for Through the Mirror series

When discussing how IDW is approaching the Star Trek: Discovery comics, Kirsten Beyer (who is also a writer for the TV series) said:

The trick with Discovery is finding where there is enough room to tell meaningful stories that aren’t going to intersect too much with the ongoing show…The serialized nature of the show means there aren’t these little corners and angles where you can jump in and write a story.

Beyer talked about how she and her Discovery comics co-writer Mike Johnson have to adapt with the work they are doing as things change in the Discovery writing room, noting:

When it became clear that we weren’t going to have as much time to spend with the Klingons as perhaps we thought at the beginning of the season, that made [Star Trek: Discovery: The Light of Kahless] all that more exciting, and allowed us to go deeper. It is an exciting process, but also vaguely terrifying, because on any given day the show can decide to do something and that takes all the work you have done and either turns it on its head, or makes it entirely irrelevant.

The upcoming second mini-series for Discovery is titled Succession will be set entirely in the Mirror Universe, tying into the Mirror Universe arc seen in the second half of the season. Kirsten Beyer revealed the series will offer “a particular glimpse into Mirror Lorca and Mirror Georgiou.” Succession is set to start in April. Sarah Gaydos also confirmed that the Star Trek: Discovery annual focusing on Stamets that was due to be released in March is now set to come out on April 4. Mike Johnson described the extended 40-page comic as “Stamets’ origin story,” saying it will show how Lt. Stamets and Dr. Culber met. It has already been announced that the Star Trek: Boldly Go series will soon wrap up. Speaking about the future of comics set in the Kelvin movie universe, Mike Johnson says “we are putting the pause button on the Kelvin-verse until we get a better sense of where the movies are going to go.” This afternoon is the Star Trek: Discovery “Visionaries” panel. TrekMovie will be reporting on all the news coming out of that and more from WonderCon 2018. So, say tuned.

Enough with the Mirror Universe!

I agree. Even the Kelvinverse comics relied waaaay too much on alternate-universe storylines. It’s like the mid-90’s all over again when Trek relied too much on time travel.