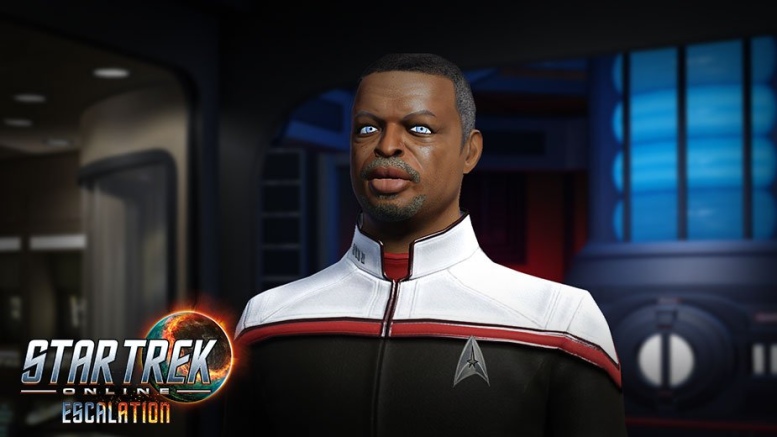 This morning at Star Trek Las Vegas Perfect World/Cryptic announced that LeVar Burton will be reprising his Star Trek: The Next Generation role of Geordi LaForge for Star Trek Online. The actor who played LaForge in seven seasons and four feature films will provide the voice for two featured episodes for the PC version of the game (and available at a later date on Xbox One and PlayStation®4). The first episode featuring LeVar Burton (titled “Beyond the Nexus”) will celebrate the 30th Anniversary of Star Trek: The Next Generation and releases on September 12 as part of the current 13th season of STO. Here is the official synopsis for “Beyond the Nexus”

Players will join La Forge and his crew as they investigate a distress call from a Galaxy-class ship whose crew is being mind-controlled by a mysterious energy source.

The episode marks the release of a fully realized Galaxy-class interior available for purchase and includes server-wide giveaways to celebrate the 30th Anniversary of Star Trek: The Next Generation. Image of Galaxy Class ship from the episode “Beyond the Nexus”

Players will be able to claim the highly requested skant uniform from Season One, as well as the Type 7 shuttle that was also featured in Star Trek: The Next Generation. “Skant” uniform from Star Trek: The Next Generation

Captain Geordi LaForge also appears in Season 14 (titled “Emergence”) which launches on the PC version of Star Trek Online this October. It kicks off with a new featured episode titled “Melting Pot.” Here is the synopsis:

Geordi and Captain Kuumaarke (voiced by Kipleigh Brown) accompanies players as they explore a new colony world, featuring the freshly reunited Kentari and Lukari people. After the events of “Mirror and Smoke,” they decided to reconcile their differences and start a new colony to celebrate the reunification of their cultures and technology. La Forge is integral to the development of this new colony world and has been working diligently with the Lukari to realize their dream. Things escalate quickly once the player beams down, and what starts as a simple tour, evolves into a pitched battle for the survival of the colony. Season 14 – Emergence features a brand new Fleet Holding in a full-scale colony on the Kentari and Lukari’s new joint homeworld, which for the first time since the Fleet Starbase, features five full tiers of progression and rewards. The update will also include a Tzenkethi Red Alert, two new fleet holding defense queues, a new colony map special event, and a powerful new Primary Specialization called the “Miracle Worker.” Additional details will be revealed when Season 14 officially launches in October.

And there is a new a new teaser for Season 14 coming in October.

You may noticed that even though the new season comes out in October there was a card at the end of the trailer saying “Victory is Life” and “Summer 2018.” This seems to be some kind of mysterious hint. As noted in this follow up tweet from STO.

What does it mean?

Thanks for tuning in, everybody!

More from STO Panel to come

There is more on Star Trek Online coming out of Vegas. Look for our update from the full STO panel and our backstage interview with the team. available on consoles by the year 2020 more than likely

so true LOL does it matter though? i’m still stuck 1oading on nimbus 3 lol

I’ve been hearing that Nimbus 3 complaint a lot lately on twitter and fan communities. Back when it first became available on consoles and I began playing I had one problem with Nimbus 3 on the final mission of that planet. It’s the worst part of the game in my opinion. Cool to see Nimbus 3 again but man they really could’ve made it more fun.

I wish this was the setup for the new show rather than DSC!

I would love to see them jump ahead into the future even if the designs are the ones we see for Discovery. That’s the ONLY thing that’s been a downer. The skies the limit when you’re looking at that time frame.

@PEB — yup, think of all the holodeck episodes they could do! Maybe they’ll have portable holodecks by then …

Oh I hated holodeck episodes too lol. Captain or crewmember falls in love with a holodeck character, holodeck characters ‘break free’ and realise they’re holodeck characters, holodeck malfunctions and becomes ‘too real’ or too dangerous or traps the crew inside of it. TNG did it, then Voyager did what TNG did. There were so many practical uses for the holodeck that were wasted because they needed filler episodes. The novelty wore off quick for me, but that’s just my opinion.

I’m not sure I really believe that LaForge is Capt. material. I didn’t think to much about it when he appeared on VOY as a captain in an alternate timeline, but I really don’t see it … what I would have loved to see is Capt. Scott in charge of a ship. That would have been fun …

@curious
I can’t believe they let you back on this site after you told someone to kill them selves.
If I ever needed another reason to stop coming to this site, this is it.

“Victory is Life” this means the Jem’hadar will be back in 2018! Maybe will finally have acces to a new space map : the Gamma Quadrant!

That would be awesome!

If Star Trek Online really, really wants to finally have the players emerce then if possible in any way or form. connect the ships interior with the exterior. finally remove this stupid beaming animation when changing to exterior view. rescale the corridors, transporters and decks for the ships. Use the available schematics to create believable interiors without size selections that would create hell of an emersion for every one of us. There is so much good in this game that gets damaged just by all those tiny bits that always through me out of the experience. I mean you don’t need to rescale the planets or most of the missions but have the ships and stations feel right. Considering that Star Trek Online was created when the Hardware Base compared to today was on a much lower end then now there is so much possible.

Nobody expects it to have the Bridge experience exactly as awesome as Star Trek Bridge Crew but it should feel like we’re in the ship that we’re commanding and the interiors are really belonging to it. Not just some losely inaccurate space with diffenrent textures that has no connection to the rest.