Since his return as Q in Star Trek: Picard was revealed in April we have been keeping track of what John de Lancie shares with his fans, and in his latest updates, he talks about a TNG reunion of sorts on the set and more.

Old home week on the set of Star Trek: Picard

Our May update on John de Lancie’s Cameo posts had him revealing he was going to be working with Brent Spiner and Jonathan Frakes on season two of Star Trek: Picard. In his latest videos, the actor has been talking about this reunion of actors from Star Trek: The Next Generation. Here are some examples from different videos:

I am back in the Star Trek universe working with he likes of Sir Patrick Stewart and Brent Spiner and Jonathan Frakes, who has been directing the episodes I have been doing right now. He always makes things better than they are.

[I have] some wonderful scenes with Patrick [and] a nice scene with Brent. Also it was directed by Jonathan, which was great fun. So, we are toodling along. We are creating great stories for you guys…

I’ve been having a really nice time working with Sir Patrick and with Brent, that was great fun. And with Jonathan Frakes, who just makes shooting a party…

It’s been a lot of fun working with Patrick and Jonathan Frakes and with Brent. It’s a little bit like old home week as it were, after many many years…

This confirms the assumption that Jonathan Frakes is directing, but not appearing as Riker (as he did in season one), at least for the scenes de Lancie has been talking about. As for Brent Spiner, Paramount+ has confirmed he is returning in season two. In season one Spiner appeared as the new character Dr. Altan Soong as well as reprising the TNG role of Data, who died (again) at the end of the season. In our previous update, we reported that de Lancie had said in one video that he would be doing a scene with “Data.” While he may have misspoken, the teaser trailer released last week showing what appears to be an alternate timeline could easily allow for Spiner to return as Data, again. Sir Patrick Stewart as Jean-Luc Picard and Brent Spiner as Spiner as Data in “Et in Arcadia Ego, Part 2”

One thing that stood out from the Picard teaser from last week is that the production didn’t de-age de Lancie as Q as he first appeared to Jean-Luc Picard, even though Q is essentially immortal. de Lancie talked about how Q on Picard is a bit different than the character seen in the TNG era:

[I’m] a little bit of a different Q this time. A little more age-appropriate, what can I say? It’s been a long time since I put on that hat as it were…

It’s going to be a different Q as well as it should. It’s not quite octogenarian Q, but time has gone by. So, it will be a different Q. Other than I am still there to annoy Jean-Luc as much as I can. And I think I do it pretty well.

de Lancie fought to add humor to Q on TNG

In one of his videos, John de Lancie spoke about the origins of Q on Star Trek: The Next Generation. Even though the character is known for elements of humor, the actor reveals that this was a point of disagreement in his first appearance in the TNG pilot:

“[Q] didn’t quite start out [with humor and nuance]. When I first did it, Patrick Stewart came over 34 years ago with Corey Allen the director. And we sat in my backyard here and we banged out lines. And Corey would say to me whenever I would send something up, he would say, “Oh, no no no. He’s got to be really right down the middle. He’s evil. He’s a villain.” And I go, “No, no. Smile and be a villain.” Otherwise I just became a cartoon. So he sort of pressed most of that out of me for “[Encounter at] Farpoint,” but when I got my second chance I began bringing a little humor in. Hey, life is short. We need a few laughs every once in a while.” 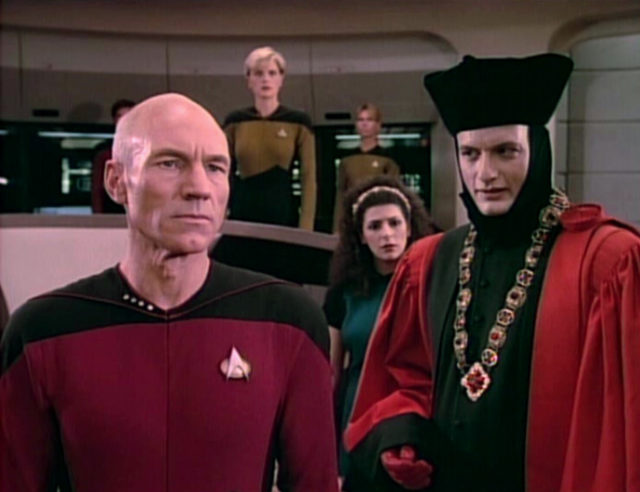 I wish I was at that party.

I would consider abandoning my family and home for the chance to have hung around on that set.

Q is the best character on star trek! Pity they dont have Q visit the other races, like the Klingons or Romulans.

I’d like to see the shenanigans Q and the Ferengi get upto :p

It’s so nice after 25 years most of the gang is back together! I love Q and recently watched all his episodes from TNG and DS9. I knew he was coming back once we (finally) got into the post-Nemesis era again. I can’t wait to see what version of Q we end up with but I am really afraid they may mess this up! But hope springs eternal!

I still want him to show up in the 32nd century on Discovery too!

FOR SURE! That would be awesome.

I mean if the Guardian of Forever can show up in the 32nd century, certainly Q can! ;)

Maybe they should do a buddy team up adventure story together!!

You know, here’s the thing about John DeLancie that I love so much, HE GETS IT! He makes Q such a great character.

I totally agree! Q is a “trickster spirit,” not some maniacal evil force. He can be menacing at times but he’s mostly just playing tricks and amusing himself in godlike ways.

As much as I love Data, I really hope they let him be. His sendoff in season 1 was perfect. Don’t lessen it by doing another Data thing

It sounds like Data is truly gone, but we’ll see more of Soong. And since both Picard and Soji are Synths that he created, it makes sense why he would still be around.

I wouldn’t mind seeing alternative timeline versions of Data. The “real” Data would still be gone.

Glad you enjoyed it, but I thought it took the travesty that was “Nemesis” and made it even worse. Against all odds, they managed to make it worse. So if they somehow corrected all of that here, fine by me.

Otherwise, I agree; let him rest.

It was perfect I agree. One of the highlights of the very uneven first season of Picard.

I didn’t like the original ending for Data in Nemesis but I think they made it worse by sort of bringing him back and then screwing with it.

I also think that sci-fi these days, especially Star Trek and Doctor Who, can be far too into the raising of the dead. Sometimes relatively senseless, tragic death like Data’s does actually have value as a plot device.

DeLancie spilling Picard secrets on Cameo is one of the highlights of this new covid world we now inhabit!

It was Frakes for S1 and Disco!

Honey you beat me to it! The silver is a hell of a good look on him.

I’m not really a big fan of the Altan Soong character, but I get that it’s a way to keep Brent around without him going through rough Data makeup at his age. But I just don’t get how much meaningful interaction can come with him interacting with Q at this point. As far as we know, they’ve never met, and they don’t have anything to do with each other.

There’s probably more meaningful scenes to be found in Q interacting with Guinan, who he has a history with, or even Seven, due to Q’s son’s friendship with Icheb. Although it’s possible Q will share scenes with them and de Lancie just decided to spoil that Q’s meeting Soong for some reason.

Yeah I agree, the whole Altan Soong thing is so contrived and ridiculous, to coin a phrase we use in Aus it’s just ‘jobs for the boys’ at this point. Stewart looking after his mate and keeping him around even though he’s not needed.

100%. They did that with Discovery as well — they kept Mary Chieffo around for the second season because they liked working with her. I think there are probably other examples as well.

Love Mary Chieffo and would be happy to see her in future Trek as a non-Klingon character, so that she doesn’t have to go through all that makeup. She could even be a regular on Strange New Worlds as a human character.

The problem with Altan Soong is his character is written as abrasive and a jerk (I mean, he locked up Picard and then tried to call up hostile cybernetic aliens to wipe out organics). If Mary has a good human character written for her, I’d be very happy to see her back.

Agree about Chieffo. I loved that she became such a ‘true believer’ of Star Trek once she got the job. I truly hated her Klingon make up in season 1 but season 2 was a vast improvement and she was still a great actress in general.

I still hope we see L’Rell back on SNW. She is STILL the Klingon Chancellor in that time period so there is no reason why she couldn’t come back on that show if they wanted to bring her back.

I love his character in SNG , he is an amazing actor, he was also great in Breaking Bad, tragic character, and Breaking Bad is considered the best in TV history.

John de Lancie is a legend, I’m so happy he’s properly back against Picard after all these years!

Why so many people like me wanted to see Star Trek go forward again! We’re finally getting the stories and characters I loved about Star Trek growing up. Q has been away too long!

I often wonder if Q and Trelain were distant Q cousins…

Q was meant to be severe in encounter at farpoint, it was Gene R railing at militarism,anti communism and religion and the stupidity of “tribal god images”. The cold war was very much still on and the Berlin wall had not fallen yet.

I still think it is funny that he disappeared into a time machine in Days of Our Lives and then appeared on Star Trek shortly thereafter.

Q is million or even billions of years old. The lifetime of Picard is nothing for him. Don’t make him too different. And please don’t make him mortal suddenly.