Yesterday’s announcement of the Star Trek: The Original 4-Movie Collection in 4K UHD also mentioned Paramount was celebrating Star Trek’s anniversary with a special theatrical event in August for Star Trek IV. We now have more details and tickets are also now available.

In addition to being the 55th anniversary of Star Trek, this year also marks the 35th anniversary of Star Trek IV: The Voyage Home. To celebrate both Paramount is working with Fathom Events to bring The Voyage Home to select movie theaters nationwide on Thursday, Aug. 19 (3 p.m. and 7 p.m.) and Sunday, Aug. 22 (3 p.m. and 7 p.m.).

This special 35th-anniversary event will also include a featurette called “Three Picture Saga,” described as “informative and entertaining” featuring cast and crew exploring the backstory of the story arc seen in Star Trek II: The Wrath of Khan, Star Trek III: The Search for Spock, and Star Trek IV: The Voyage Home.

“We are so proud to work with Paramount to bring this Star Trek film back to theatres for the 35th anniversary,” said Tom Lucas, VP of Studio Relations at Fathom Events in a statement. “Between being nominated for four Academy Awards and the unconventional storyline, this film, in particular, deserves the big-screen treatment.” According to Fathom, they will be showing the remastered version of the film. Tickets for Star Trek IV: The Voyage Home are on sale now at www.fathomevents.com and through participating cinemas’ box offices.  For the most updated list of exhibiting movie theaters, visit the Fathom Events website. (Theaters and participants are subject to change).

Fathom has also released a trailer for the special event…

Yesterday Paramount announced the new Star Trek: The Original 4-Movie Collection with the first four movies remastered in 4K Ultra HD. The 8-disc set is now available for pre-order at Amazon for $70.48 and arrives on September 7. 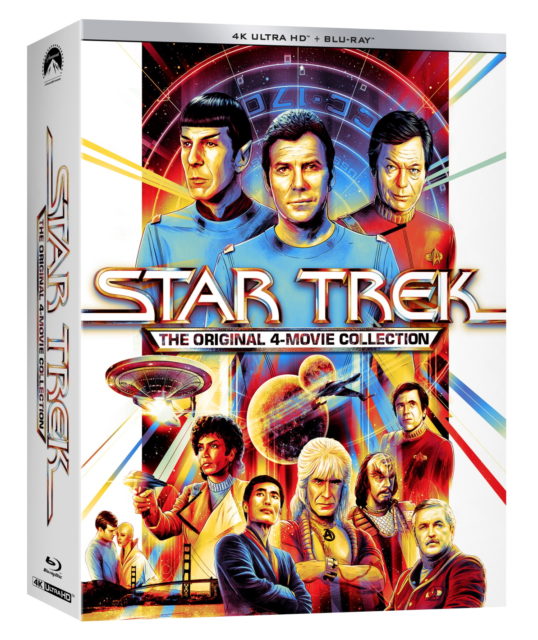 This should be fun. Everyone should go out and see IV again and support the movie industry after 18 months of avoiding theaters due to the pandemic. I hope the surrounds come out in this version that at least matches, if not exceed my memories of the 70mm experience from ’86.

I went to the TMP one they did and was surprised by the weeknight turn out. Unfortunately, the movie digitally projected was that of the video version, not even the Director’s Edition. You could tell by the alien language translation fonts.

Wow, this is happening so fast! I’m definitely doing this! And what’s even better is the movie will be playing in my favorite theater in my city. What are the odds? Same theater I saw What We Left Behind back in 2019. I am so pumped for this!!! How much of a fan do you have to be excited to see a movie you not only seen at least a dozen times but can literally watch again at this moment?

August is going to be fun! Lower Decks is back and another Trek film on the big screen!

Bought my ticket. I can’t wait to experience this on the big screen.

I love old school movie trailers that give away 90% of the movie.

Nice, I’ll now have seen Motion Picture, Wrath of Khan, and Voyage Home in the theater in just the last couple of years.

Well, it’s not a very good film but it’s a bit of a ‘guilty pleasure’ so I’ll probably end up checking it out. It was the only film my non-trekker friends agreed to see back in the day

I’m not sure if you’re posturing, just plain trolling, or sincerely of the opinion Star Trek IV: The Voyage Home is “not a very good film” but more of a “guilty pleasure”, but in case it’s the latter, you should probably be aware most of us think it actually is a good film – not perfect, sure, but most people consider it one of the better ones in the franchise, and it’s certainly one of the most popular. Possibly more than any other, it helped launch the old conventional wisdom / joke about the even-numbered Treks being the best (not that I agree with that view myself, but it is certainly a thing that exists, and the overwhelmingly positive reception of this particular film is a large part of the reason for that).

Its never been one of my favorites. I mean, its a lot of fun and I enjoy it, but the plot is kind of stupid and it doesn’t really have the feel of a Star Trek movie.

Will this also be happening in Canada?

Bought tickets yesterday and I can’t wait! For a few hours that day, I’ll be 21 again.

Had tickets for Wrath of Khan a couple years ago, but it got canceled due to a hurricane. Just bought tickets for this one. Hopefully mother nature doesn’t send any weather this time.