It’s the day after Thanksgiving, which means it’s time to save money, and there are some Black Friday deals out there of particular interest to Star Trek fans—but for some of these, you need to act fast.

Paramount+ is the exclusive streaming home in the USA for Star Trek TV, including five original Star Trek shows, all of which have new seasons coming up in 2023 and beyond. And to catch it all you can save 50% off on an annual plan, which brings the price down to $24.99 for a year with ads and $49.99 for a year for the ad-free plan. The offer is available to new and returning customers, but you need to take the deal before Monday, Nov 28 at 8 AM Pacific Time. To get the deal CLICK HERE and use the code “BFCM50.” 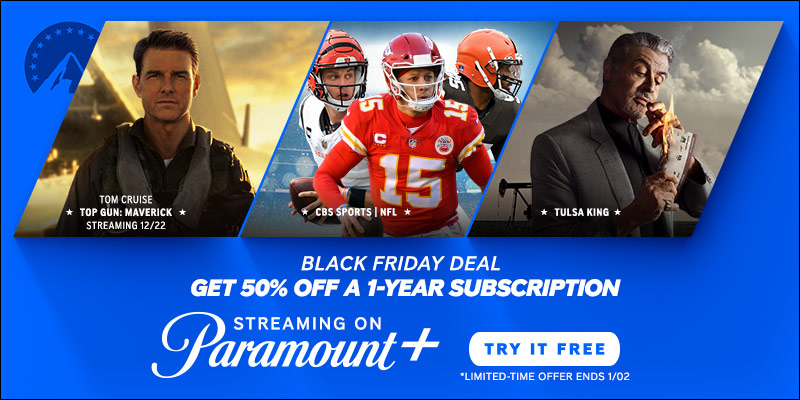 If you want your Star Trek on physical media, Amazon has some deals you may be interested in. All five live-action complete series collections are marked down for Black Friday deals up to 59% off. Act fast, as these deals expire on Saturday, November 26.

As for the movies, you can get discounts of up to 63% off collections of the TOS movies and the Kelvin movies.

Star Trek stuff up to 89% off at Entertainment Earth

Over at Entertainment Earth, they are running a Black Friday sale on Friday, November 25th only with discounts of up to 90% on a selection of toys and collectibles from multiple franchises. This includes a Star Trek: Discovery Starfleet Command Coir Doormat for just $3.09 (89% off).  They also have outlet deals for more Star Trek items, including Star Trek: The Motion Picture patches for $1.42 (76% off), a First Contact poster for $3.42 (77% off), and a Discovery Michael Burnham Mego figure for $13.50 (39% off). If you are a big spender, you can pick up the giant Playmobil USS Enterprise playset for $179.99 (64% off). 25% off sitewide at Star Trek Shop

The official Star Trek shop has a Black Friday deal with 25% off everything if you CLICK HERE and use the code “FRIDAY” by Sunday, November 27 at midnight. The Star Trek shop has lots of stuff from apparel to collectibles covering the classic series and movies to all the new shows, like Lower Decks USS Cerritos bar beer steins discounted to $17.97. Keep up with all the Star Trek Merchandise news and reviews.

That be the one sheet for Trek XIV

Well, I just tried to switch from monthly to annual on my existing plan and with one click they charged me $99. I couldn’t figure out how existing users get the 50% off.

I figured it out, there is a promotion box in your account settings. After signing up for annual you can type in “BFCM50″ to that field and it will apply the 50% off.

Can someone here approve or deny if in this second release of the TNG blu rays (the complete series 2017 release) are the FIXED episodes that were fixed for streaming (Netflix at the time) after mistakes were detected on the first disc releases?
Google “Netflix brings VFX fixes to TNG” if you want to see what I’m talking about..
For example in the episode “Imaginary Friend” when Troi leaves ten forward with the girl they fixed the visible blue screen (2 times visible when crossing both ten forward enterings) and integrated the red star cloud..

They have never re-authored the discs as far as I’m aware. It’s the same discs repackaged again and again.

But there must be a point where all discs they have manufactured are empty.. In this case will they print new discs with the updated episodes or the old ones?

There’s more work to changing the disk than simply copying over the corrected files they give to streamers. So they will probably just keep copying the old masters.

To build on what DIGINON said. CBS/Paramount Home Entertainment have the disc masters already prepared. All they do is tell the factory to stamp out more of the same. It would require them to go back and create new disc masters and re-submit it to the different regional disc manufacturing factories (there’s one in North America, a couple of Europe, etc.).

I understand… It’s a bit work to do but I don’t think it’s too much work for a perfect result/product. But these guys are seeing it different it seems

once you get their money, never give it back

Revised to *Once you get their money, you find ways to get even more.

The Playmobile Enterprise is even cheaper today (179.99 before tax). Still a pretty penny, but…

There’s a free week of most streamers on comcast right now that ends today. I took a look at STAR TREK V on showtime, just to see if the new scan for the 4k really registered. I only looked at a few scenes but noticed in the two VFX space scenes that there were ‘new’ defects in ship shots of the BoP, big blue blotches that appear for just a couple of frames at the start of two shots (when you see the ship after Enterprise departs for Nimbus III and again during the runup to the Galileo crashlanding.) Have to say I do not remember seeing these defects in the theater, and I saw the film theatrically four times, twice at a really exceptional cinema, and I know they weren’t ever there on laserdisc or previous DVD and Blu (have seen this movie at least 80 times all the way through, and that’s not counting all the partial views, like when I discovered the last frame of the BoP into camera shot is intensely clear — they had trouble matting so they didn’t shoot to incorporate natural blur.)

Just re-subscribed on P+ with the 50% annual discount. I been paying monthly for it the last year. I got the same deal two years ago. It’s too good to pass up, especially with all the (hopefully) great Trek content coming next year!