It’s time once again to get caught up on the latest news in Star Trek merchandise, with a number of recently announced and released products from the final frontier to put a dent in your wallet.

The official Star Trek site just announced prolific Star Trek Author Dayton Ward is ready to be your Trek sensei, with his new guide Star Trek: Kirk Fu Manual: An Introduction to the Final Frontier’s Most Feared Martial Art. The illustrated guide from Insight Books promises a “one-of-a-kind fighting manual” which “showcases the unique combat style of Captain, James T. Kirk.” The 64-page hardcover is due out on March 5th, 2019 and cane be pre-ordered at Amazon for $14.99. Perfect thing for that trip to Risa

If you are seeking jamaharon, you are going to need to get yourself a Horga’hn and the folks at Roddenberry have just announced they are making a replica of the prop from Star Trek: The Next Generation.  The 1:1 scale replica is constructed from durable cast resin, and weighs a whopping 55-ounces. Each is hand-finished, so no two are alike, and comes with a certificate of authenticity.  Due in July, the Horgga’hn can be pre-ordered for $249.00 from Entertainment Earth, or directly from Roddenberry.com. If you are looking to show off your fandom while enjoying your favorite beverage, there are a number of new products that might be of interest. First up are two new big sculpted ceramic mugs from Vandor, one styled as Captain Kirk from Star Trek and the other styled as Captain Picard from Star Trek: The Next Generation. Due in August, and you can pre-order both from Entertainment Earth: Kirk mug for $19.99 or Picard mug for $19.99. Also from Vandor is a new Star Trek: The Next Generation Acrylic Travel Tumbler. The 16 0z. tumbler is double-walled with a spill proof cap, so perfect for the fan on the go. Due in July, you can pre-order a TNG tumbler from Entertainment Earth for $12.99. Eaglemoss, best known for their popular line of mini ships, has revealed their first Star Trek bust. Coming in November, the hand-painted TOS Captain Kirk polyresin bust will be 6″ tall and comes with a “fact-filled magazine.” You can pre-order the bust at Entertainment Earth for $29.99. And Gentle Giant has revealed they will be doing a San Diego Comic Con exlusive with a Saru from Star Trek: Discovery bust (which was previewed at Licensing show last month). The hand-painted Saru bust is based on concept models and authentic production files to accurately match Doug Jones’ look in the show. The limited edition busts are each hand-numbered and come with a certificate of authenticity, and will be available exclusively at the Gentle Giant booth (3513) at San Diego Comic Con (July 18th through 22nd). Anovos have announced the follow-up to the Discovery phaser replica, this time going big with a Starfleet Phaser Rifle Replica. The fully interactive prop replica is based on official reference material and is made using the same kind of 3D printing as the real prop. The rifle replicas are bristling with features, including a HUD scope with OLED screen. Of course all of this cool accuracy comes at a price, but if you have deep pockets you can pre-order one at Anovos for $1,500. T-shirt of the week: Disco phaser

If you are disappointing by the recent cancellation of pre-orders for the McFarlane Toys Discovery phaser, and can’t afford the Anovos replica, a new tee may provide some consolation. The Star Trek: Discovery Phaser T-shirt features a detailed diagram of the Starfleet weapon from the show. The shirts come in a number of sizes and can be ordered at the official Star Trek store for $24.95. And when you get tired of the horgahnh, they will sell you hor-be-gone.

I might have to get the GNDN drink ware lol

Sadly, this is 21st Century Earth, not 24th Century Risa.

Even the merchandise is starting to suck now. Trek is truly a franchise lost in space. 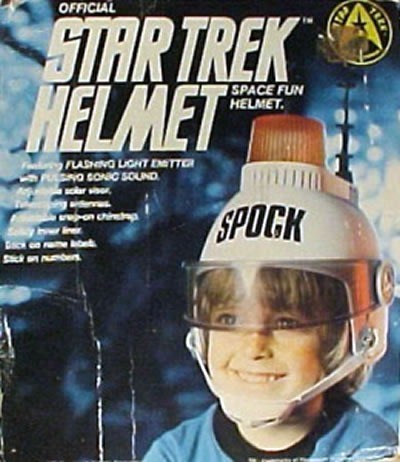 I remember the version of this ad that had the name spelled SPOK.

Hey, give them some credit! They got the blue shirt with a black collar right. And at least it doesn’t say “Star Trek” on the toy itself.

I just wish there had of been an episode of TOS with nimoy wearing this!

We can only dream…

Strangely enough, I have little desire for more coffee cups or statues of cloven hooved creatures….

The Saru bust looks really nice,just not hundred dollars nice. It’s kinda small,but would totally pay fifty bucks for it! A hundred is just too pricey for what it is. But that’s just me of course,I’m sure it’ll sell since it’s a con item.

Wait… Aren’t they going to have to put a day-glow orange front end on that phaser rifle? I mean, some kid could get shot carrying that thing around like that, right?

Will
Reply to  Captain Dunsel

Do you know a lot of parents who give children $1500 prop replicas as toys?

Captain Dunsel
Reply to  Will

No. But I know of a whole lot of children who might “borrow” their parent’s $1500 prop replica as a toy.

I think gunstock based weapons are possibly exempt? At least Elon’s personal flamethrower, doesn’t have one even though it doesn’t fire projectiles and has extremely short range?

I’d love to have a Horga’hn but that’s at least $200 too expensive.

Can’t put my finger on it, but there’s something very familiar to the KIRK FU illustrations’ art. Anyone know who the illustrator is?