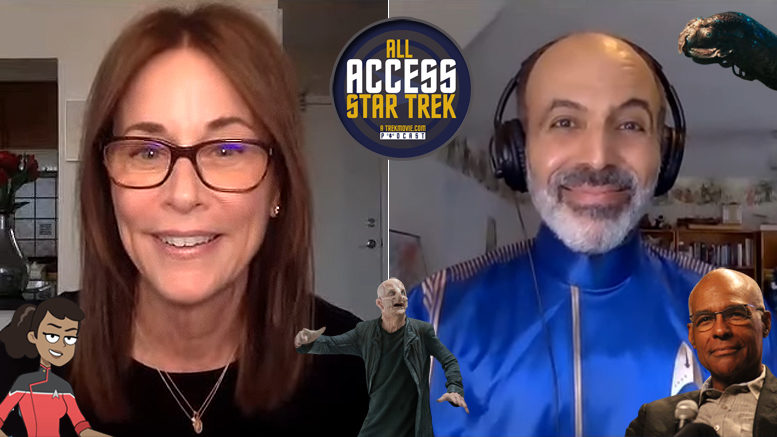 Tony and Laurie chat with Star Trek science consultant and biology professor Mohamed Noor and Discovery actress Jayne Brook (Admiral Cornwell) about their new web series, BioTrekkie with the Admiral, talking about The Burn, Cornwell’s death scene in season 2, trance worms, and technobabble, among other topics.

Before the interview, they cover the latest on Lower Decks, Star Trek: Discovery season 4, and Paramount+, and play part of Tony’s interview with Michael Dorn talking about Star Trek: Picard . The pod wraps up with a Trekkified Celebrity Wheel of Fortune and a fun story about Tim Russ and Garrett Wang.

Review: ‘The Autobiography of Kathryn Janeway’ Delivers An Insider’s View Of Voyager’s Captain

BioTrekkie with the Admiral YouTube series with Dr. Mohamed Noor and Jayne Brook

Let us know what you think of the episode in the comments, and post your suggestions for topics we should cover.

I’ve just now realized – since I’m watching it again – that she played Paul Lewiston’s (René Auberjonois) Daughter on Boston Legal … that show had all the Star Trek Actors … apparently even the ones, who didn’t know it yet :-D

Admiral Cornwell was one of the best things to come out of Discovery and, though I’m sad her character is out, I love that she went down saving the big E.
Maybe they can do some Short Treks or special miniseries of her fighting the Klingon War to save the Federation with a Connie as her flagship during the time period the Discovery went missing.
Quite frankly I think she was my favorite character out of Discovery along with Michael in the first two episodes, Pike in the second and of course Captain Georgiou/Emperor.

I’d love for her to be featured in a Short Trek too.

What a great idea Commander Bremmon.

By the way, if you’re into Trek-lit, Cornwell makes an appearance in the MU Georgiou novel “Die Standing” . I think that you might enjoy it.

I wish they hadn’t killed her off. She could have turned up on Strange New Worlds!

I am defiantely going to have to read the Discovery novels.
Did anyone read the Enterprise War, was it good?

Thanks Laurie and Tony for another great podcast. Having guests on the podcast works really well and I thought both Jayne and Mohamed were excellent throughout your discussions. It’s also great having a weekly recap of Trek news. Looking forward to next week.

We were worried about having four of us (and I don’t envy Tony when he has to edit and turn it around in a day), but it worked out great. We got lucky with our first guests! Mohamed and Jayne both have such interesting insights into both the science AND the story. Talking to them was a lot of fun.

I absolutely loved this episode. It’s one of my favorites. I subscribed to biotrekkie with the admiral on youtube.

I loved the scientific explanation for the burn from Mohammad. I always assumed that dilithium controlled the matter- antimatter reaction and if went inert, the ship would explode. I’m happy he confirmed that theory.

Also, bringing up Cornwell’s death made me laugh. I loved Jaynes insights and it’s nice to hear her joke about it too. I am sad we will not see her in Strange New Worlds.

Great Episode! It was a delight to listen to. Keep up the great work!

They were terrific guests. Their show is a perfect combination of enlightening and entertaining, whether they’re talking science or production. I’ve been really enjoying it. So glad you liked the podcast! We are working on getting more guests now that we’re not reviewing episodes anymore.

Some fans attack Discovery for being the most unscientific show so it’s definitely interesting to hear that quite a lot of scientific thinking does actually go into it. One aspect that might be hurting Discovery is that whereas some of the Berman-era shows would sometimes “drown” in techno babble Discovery seems to be overcompensating by providing very little explanation. And when they do, they kind of race through it and don’t give the audience time to soak it in.

I always assumed that dilithium controlled the matter- antimatter reaction and if went inert, the ship would explode. I’m happy he confirmed that theory.

I also got that part of how the burn worked from the Discovery episode itself. The thing that was very blurry was how Su’kal interacted with Dilithium, basically how he was able to cause it to go inert everywhere. That should have been made more clear on the show. It seems like their science advisors had worked out at least some more details of that.