With Eaglemoss releasing their  Star Trek: Deep Space Nine Illustrated Handbook, we thought we would take a closer look at their model for the Deep Space Nine station itself.

After the runaway success of Star Trek: The Next Generation, TNG producers Rick Berman and Michael Piller had a weird idea: a Star Trek series set not on a Federation starship but on a space station. And not just any space station: an alien space station in a war zone, where the denizens of the galaxy would work alongside Starfleet officers. Deep Space Nine might still be the most ambitious and successfully executed of any of the post-TNG Trek shows (you’ll get arguments about this of course, because Trekkers and Tellarites love to argue), and its home base is inarguably the most unusual in the franchise. Production designer Herman Zimmerman and senior illustrator Rick Sternbach created the basic design of the Nor-class Cardassian space station, looking specifically for a distinctive shape that would be easily identifiable even when seen as a tiny, distant object on TV screens. Other artists including Ricardo Delgado, Joseph Hodges, Nathan Crowley, Jim Martin, Rob Legato, Gary Hutzel, Michael Okuda and even Berman contributed additional design concepts and details and the six-foot diameter miniature of the station used for shooting visual effects for the TV series was bult by Tony Meininger. There have been a lot of reproductions of DS9 over the years, everything from an AMT model kit about 16” across to a vinyl Micromachine that fits in the palm of your hand. There’s also been a pewter edition so Eaglemoss/Hero Collector’s edition isn’t the first model of the space station with metal components, but the Eaglemoss one is definitely superior to the old Franklin Mint collectible and the upgrade in size from the 6” Eaglemoss regular edition to 8” has allowed for some improvements in detail on this release, particularly in the fiddly Ops/Promenade area and its subspace antenna array and the painted window details—particularly around the central bottom section and the reactor core the paint detail is terrific, with myriad teeny tiny windows and a nicely delineated red reactor glow. The main structure—the outer and inner rings and the central habitation area are made of metal, giving the piece an impressive weight and durability; although I’m not going to drill into it to find out, I believe the docking arms and some of the other details are rendered in plastic, but they too seem quite sturdy. Overall paint detail is also impressive, with the station’s warm bronze/tan overall color and gold/mustard and copper insets faithfully reproduced. The smaller DS9 release did not include a stand (the station sits nicely on its three lower docking arms), but the XL edition includes one that lifts the station about an inch off your desk or shelf and also provides a great deal of stability compared to the top-heavy Regula One and Trek III Space Dock releases. Deep Space Nine’s stats are a little hard to pin down—it’s sometimes described as “over a mile in diameter” but another figure commonly used is 1492 meters across or 4791.6 feet which makes it a little under a mile in diameter. That makes the model at 8 inches across roughly 1/7200 scale. I like to know these things. Overall this is a beautiful reproduction of the Cardassian space station and well worth adding to your collection. You can pick up the XL Edition Deep Space Nine for $74.95. 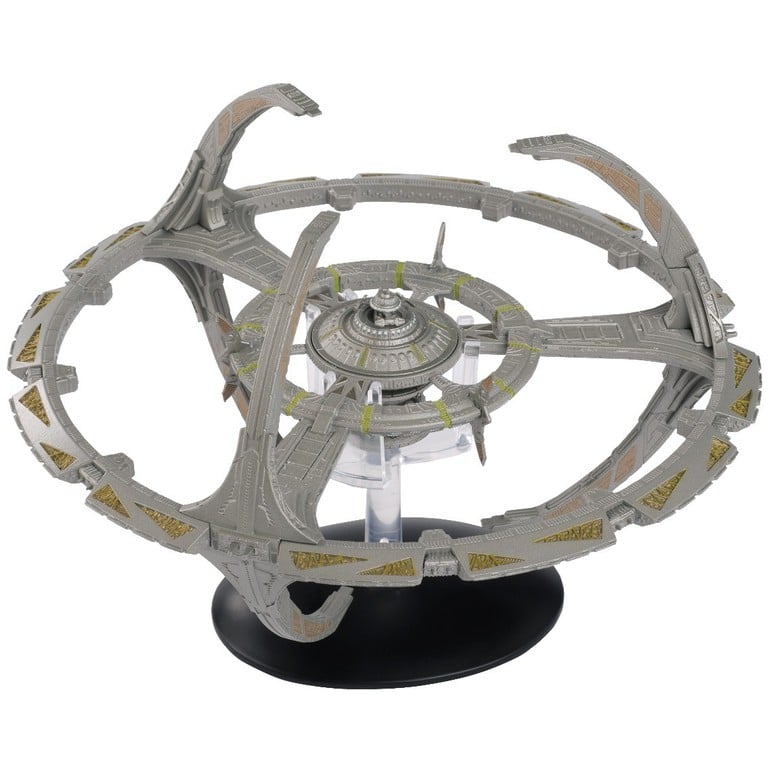 Hero Collector launches their “Build the U.S.S. Enterprise-D” subscription program in March. The program has you subscribe to regular deliveries of parts and simple instructions (without the need for glue or paint) to form your own 2-foot long U.S.S Enterprise-D model, complete with stand, detachable saucer, and internal lights.

Subscribers will receive four kits every month for $12.90 for each kit. There are a total of 120 kits, so it will take around 30 months to complete the model. The first two kits have an introductory price of $4.95 with free shipping and you also get some free pins.

For more details see our previous coverage. To register your interest, and find more details, photos, and videos of this amazing model, visit build-model-enterprise.com.

Looks very impressive. It would be even cooler if Eaglemoss created a properly sized Defiant to dock at the station.

but what is properly sized ;)

As large as a galaxy class and as small as a runabout, with a full sized shuttle, and mile long jeffries tubes. Short in the long ends, and wide in the narrow spaces. It should be both enormous and compact. It’s really not that hard to envision, why are you being so difficult?

It’s nuts how inconsistent that was, but as a kid I never noticed.

What still boggles my mind is how big the D’deridex warbird is supposed to be. It’s nearly 2/3 the diameter of the station. It would look so ridiculous if one was ever docked.

Which is why they have always scaled models to what looked good on screen.

I did some basic calculations (because I apparently have that kind of time) and the width of the Defiant would have to be ~0.8 inches to be dimensionally correct to the DS9 model.

This comment chain is what I love about the internet!

Yes, I think I need this. Just gorgeous.

If only they’d kept the Graphic Novel Collection going. I have much more interest in those books and am gutted they chose to end the set so close to reprinting every comic.

This is beautiful. I had that AMT model kit, sadly it looked nothing like this. This is one I will buy.

The tiny runabouts that came with it were adorable, though!